When we first moved into our home, the fireplace was the original hunter green tile from when the house was built in the 90s. It wasn’t really our style, so we decided to do a fireplace update and make it look… older? At least that’s what I saw in my head and tried to explain to Matt. AKA my lovely husband who makes all these thoughts translate into finish products. Luckily he went along with it, because we’re so excited about the progress!

The house was built in the 90s, but I wanted the fireplace to look like it had been there for 100 years with an old brick design. I wasn’t in love with the color or style of the existing tile or moldings, so first things first was demoing those out. 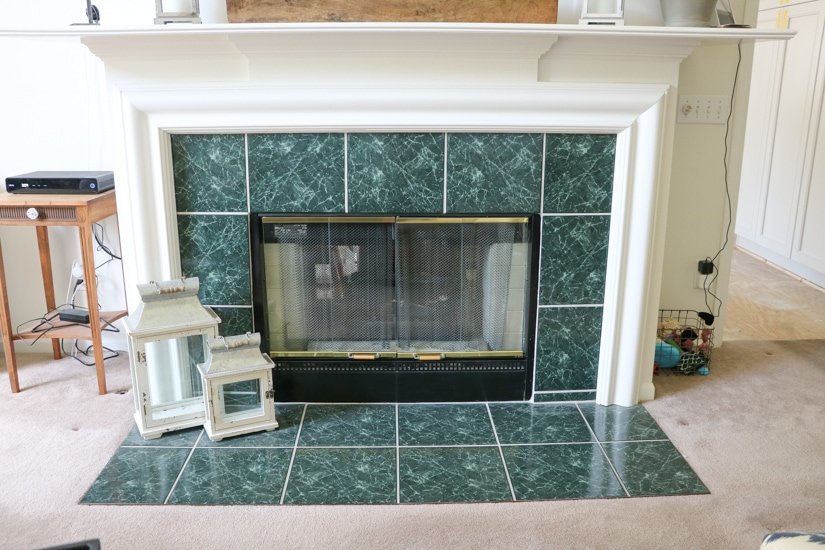 Removing the tile was much much easier than we expected, but it did chip quite a bit and was oddly sharp. If you have similar tile, be sure to take safety precautions 🙂 At first we weren’t sure if we were going to work with the existing mantle or create a new one. However, after seeing how easy everything came off and how little the mantle was supported (the only thing holding it up turned out to be that crown!) we decided to start from scratch.

Just a little bit of that domino affect thing 🙂 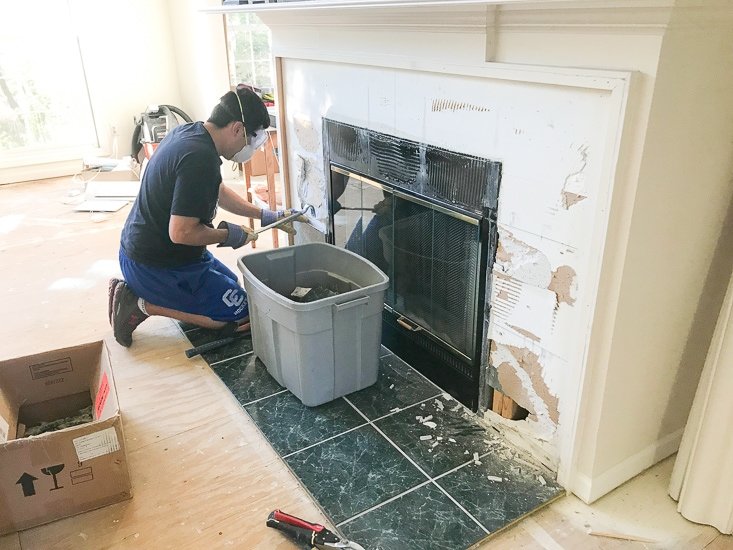 Since we were also getting our floors installed shortly after, we changed up the size of the hearth and made it a little smaller, while making sure it was level with the new wood floors so that it wasn’t a trip hazard. We found some great brick tiles from Home Depot and combining them with a 1/4″ cement board was almost a perfect match for our 3/4″ wood floor height. We also added metal tile edge trim around the finished hearth to make grouting and laying the floors much easier and cleaner. 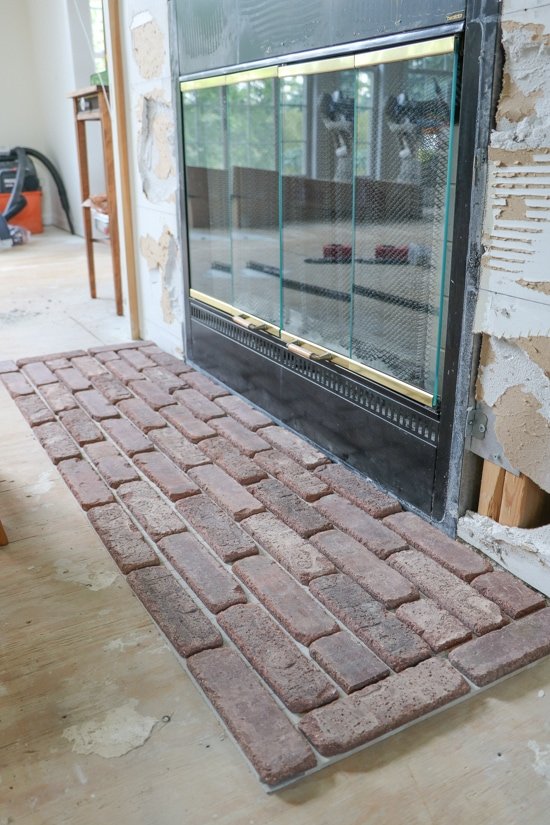 Once those were done, we started on the face of the fireplace. We browsed through tons and tons of photos on Pinterest and settled on an arched pattern with a single layer of brick going up the sides. For moldings we picked and a more craftsman square molding surrounding it that matched the rest of the trim in the house, and we switched up the thin white mantle for a more chunky rustic stained version with corbels. 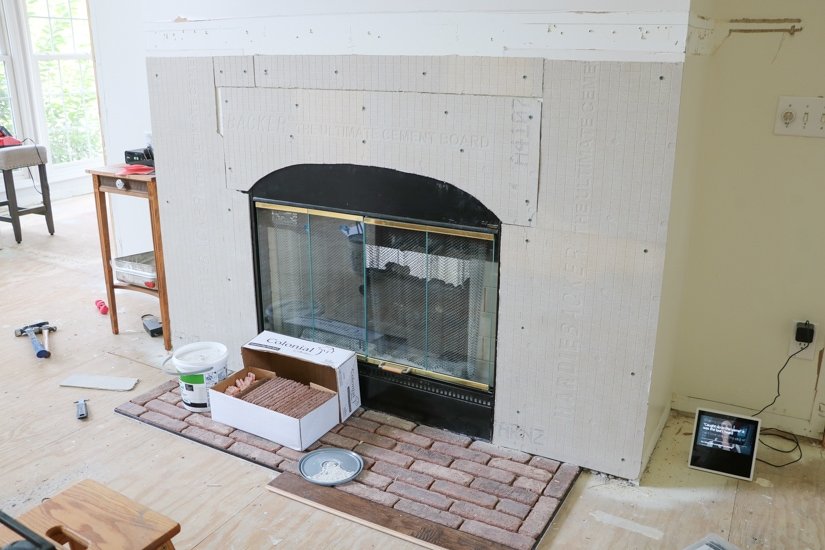 Once all the brick was laid, we used lots of grout to master the “old” look of the brick. We tried a few different methods, but in the end the winning combo was as simple as using a grout bag (think cake icing bag) to fill in the gaps with a heavy amount of grout, and then smearing the grout into the face of the bricks using our hands. It was a bit messy, but with Matt squeezing the grout into the cracks and me following close behind to smooth it out and smear it on the bricks, it went pretty quickly! 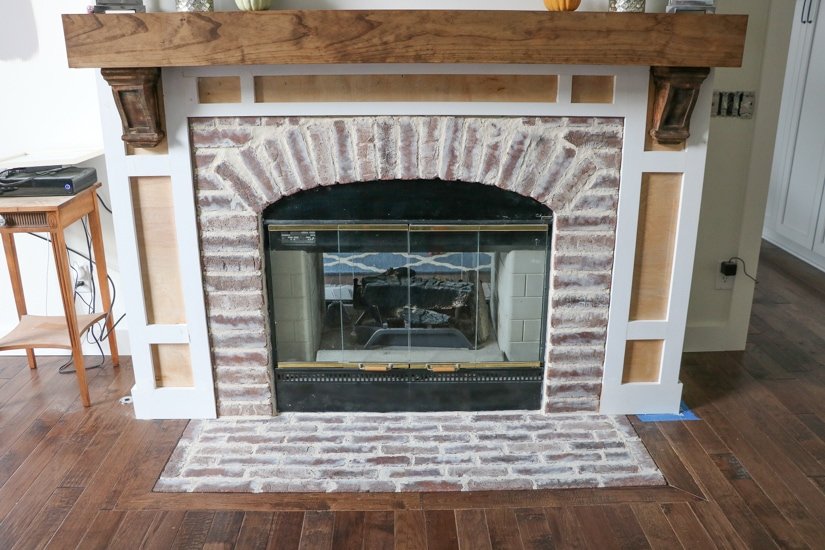 The mantle was a really simple build made out of 1×6’s anchored onto a 2×4 that was screwed into studs on the wall, and the corbels were added partly for support, but mostly for decoration. A little boxy trim, some caulk and paint, and this part of the project was done! 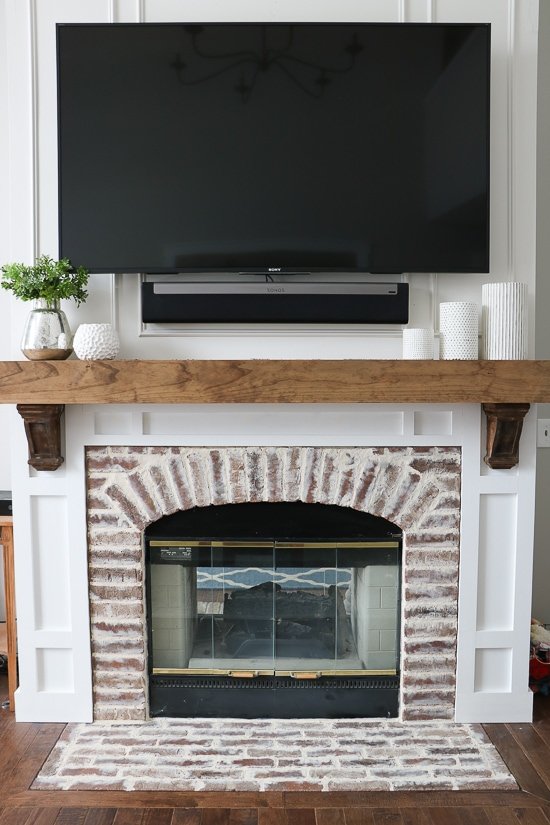 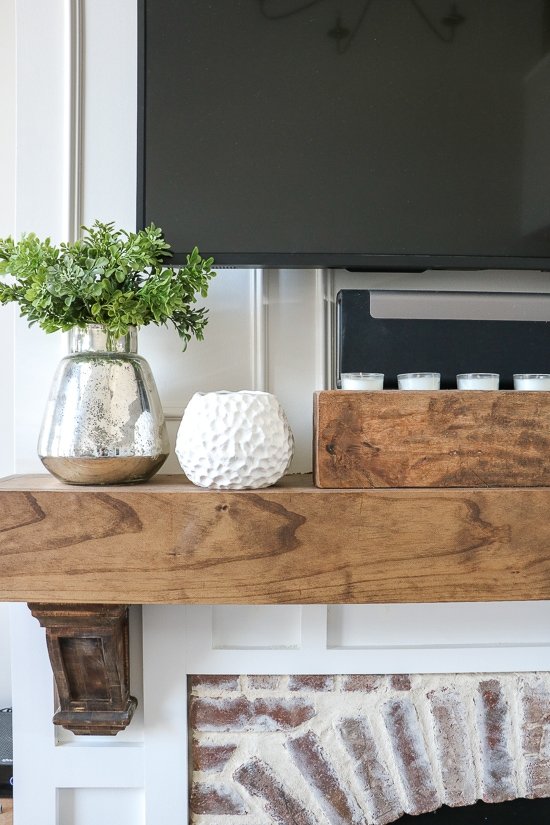 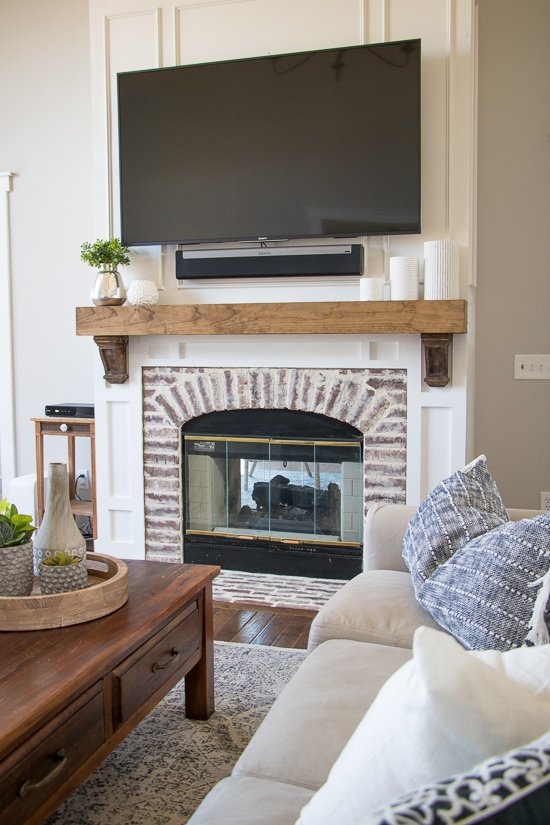 Phase two of this project will be spraying the gold insert with black high heat paint (once it finally decides to warm up so I can open up some windows for ventilation!) and finishing the top half of the fireplace. We’re in between continuing the boxy trim, or adding horizontal shiplap all the way up. It extends all the way up to the second floor since this room has a vaulted ceiling, so we want to be sure before we break out the ladder! After this project is done our living room will be so close to being “done” for now which will be a nice change 🙂

What do you think? Shiplap or boxy trim? Another option? Even though were only halfway done with the project, I’m so happy with the transformation so far!

This site uses Akismet to reduce spam. Learn how your comment data is processed.