Today we’re heading back into our family room to tackle the recently built-out fireplace wall. I know it’s been a while, so let’s refresh with what we started with… 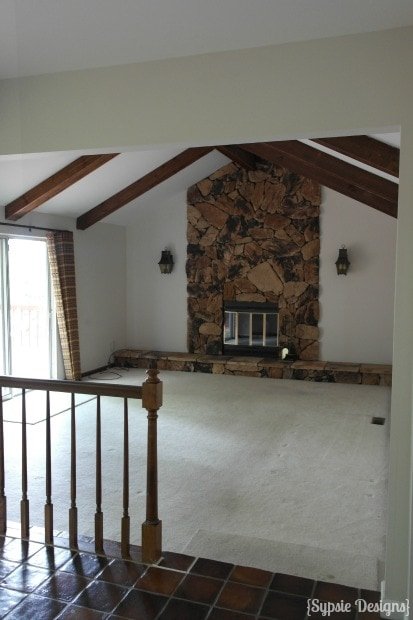 Here was the room the day we got the keys! We loved the idea of having a fireplace, just not that exact one : ) So, instead of tearing down all of that old faux stone and replacing it with another flat and modern solution, we decided to have it built out to create more of a focal point. 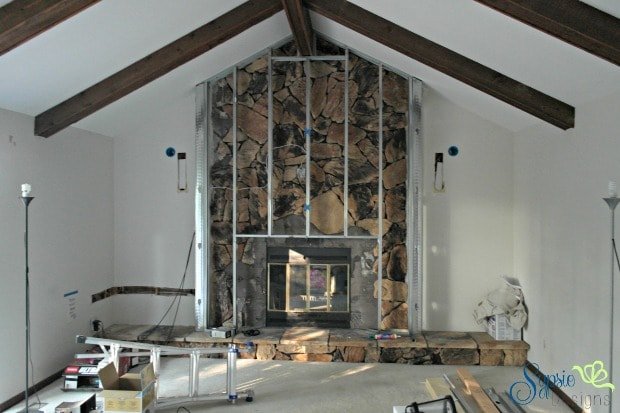 The framing went up pretty quickly and we decided on spots to reinforce for the TV and the mantle (blue x’s mark the spot! it’s a thing, trust me.) We also removed those lanterns removed and had the lights moved higher and as centered as possible. I’m sure some really cool things came out of the 1970’s, but unfortunately their lighting choices were not one of them : )

A little drywall and finishing, and we were ready to put together our new fireplace!

We chose to use a product called Airstone after being stopped by one of those talking end-caps at Lowes, you know, the censored ones that go off when you walk by? That’s also the reason we own a Nest thermostat. Those little TV’s could probably sell us anything. Isn’t that a scary thought…

Anyways, it’s a faux stone (ironic since that’s what we just covered up) that comes in a few different colors and is crazy easy to install. All you need is a tool to slap some adhesive on the back of the stone, and any type of handsaw you have to cut them. Spring Creek, the gray tone, was our color of choice. We did add a few “prep” steps to make the process easier, which involved hosing them off (our boxes were super dusty from shipment but that could have just been us!) and sanding all of the sides to get off any uneven pieces that would cause the stones to go on uneven.

Then, since there are 4 different colors and a variety of sizes, we decided to lay them all out to get the general layout for the wall, and then got to cutting and pasting! Do you see what I did there. 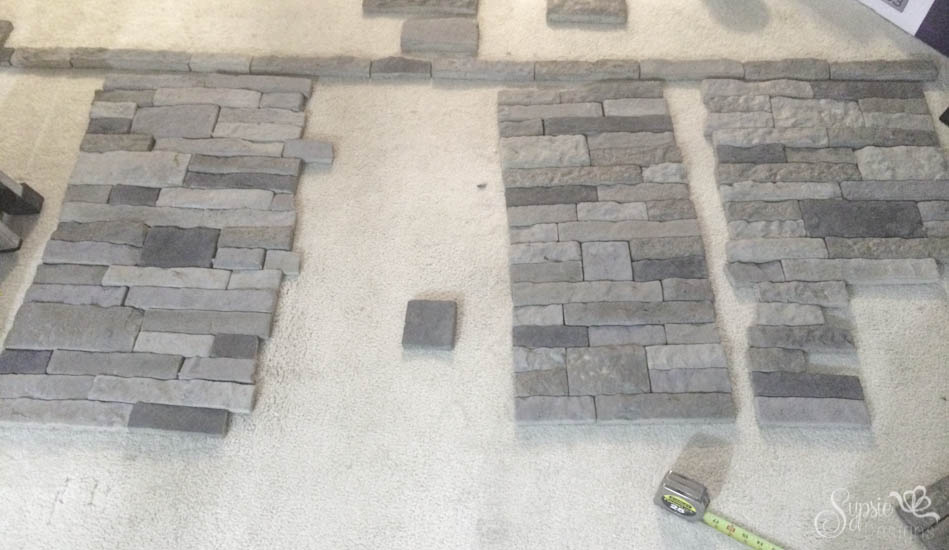 They went on just as promised- very easily, and we were even able to cut them at a 45 degree angle around the corners near the fireplace insert. 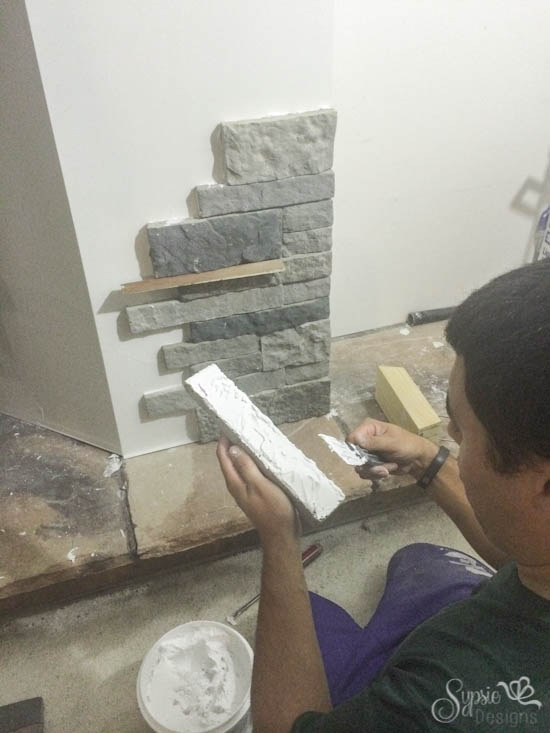 The whole job took about 3 nights of work between the two of us, but I can imagine it would go much faster if you had less/non-angled cuts! We left the sides blank for now because eventually built-ins will be added, and took it all the way up to where the mantle was going. 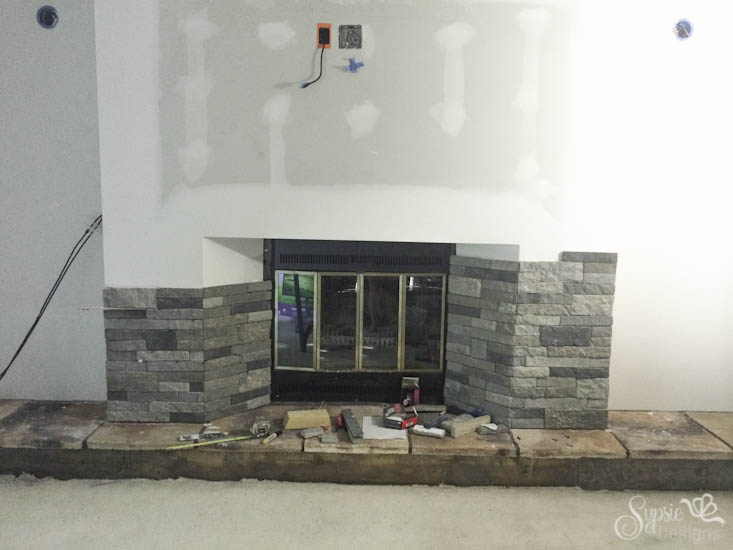 Boom. We had a stone fireplace for way less than the cost of tile! 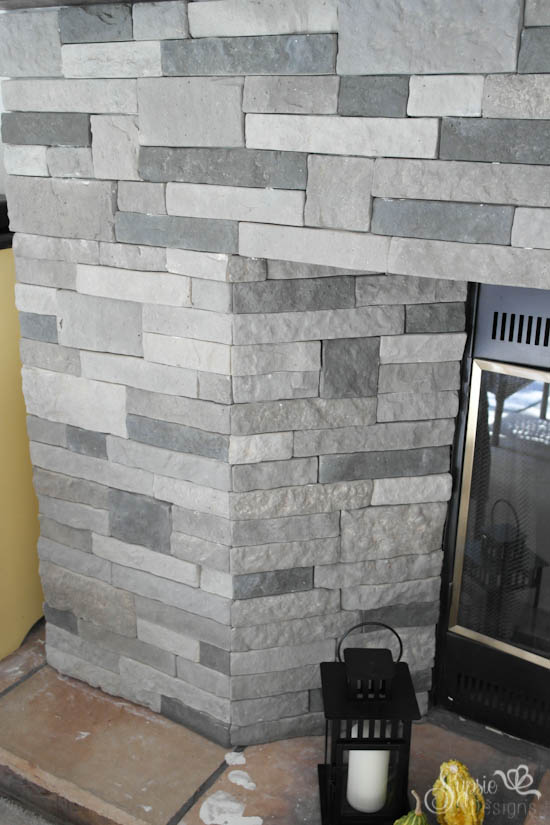 The next project on today’s list is an amazing rustic mantle. This is another project that M surprised me with while I was gone on a long weekend with the girls, and I absolutely love it! (the last weekend I was gone he did the tile in our bathroom reno!) He’s pretty amazing!

We had been looking at different reclaimed wood options from websites and even craigslist for old barn wood, but they got a bit pricey and it was becoming a challenge to find the right look we were going for. Then, M came up with a brilliant plan that got us the look of reclaimed wood for less than $50! Sound like something you’d be interested in? Here’s a quick tutorial! 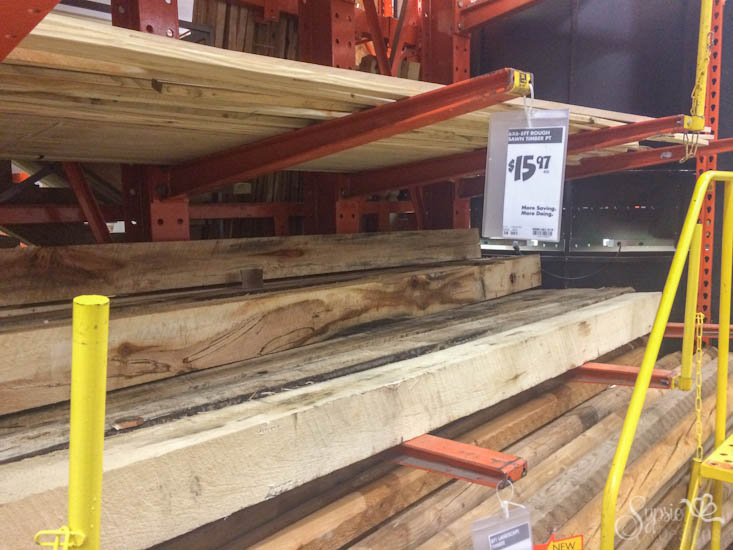 We used an 8′ 6×6 piece of lumber from Home Depot. Now, this piece of wood is going to look incredibly scary when first loading it into the cart. It’s furry, it’s cracked, and it’s 40 different colors, but as long as it’s straight, it’s going to look amazing in the end! Plus, you can’t beat $15 for reclaimed wood! Unless you own the barn that’s being torn down, or know someone. In that case, oh hey there friend : )

If you didn’t already guess, the first step is to sand, sand, sand and then sand some more. But it’s totally worth it- I promise! He started with 60 grit and moved his way up to 300.

After everything was all smooth, he stained the beam with a custom mixture- one coat of Rustoleum Weathered Gray followed by a coat of Minwax Special Walnut. Stain is something that you can never really mess up- simply add a different tone or darker color, or sand and start from scratch!

A few coats of poly were added for protection and it was time to hang it. 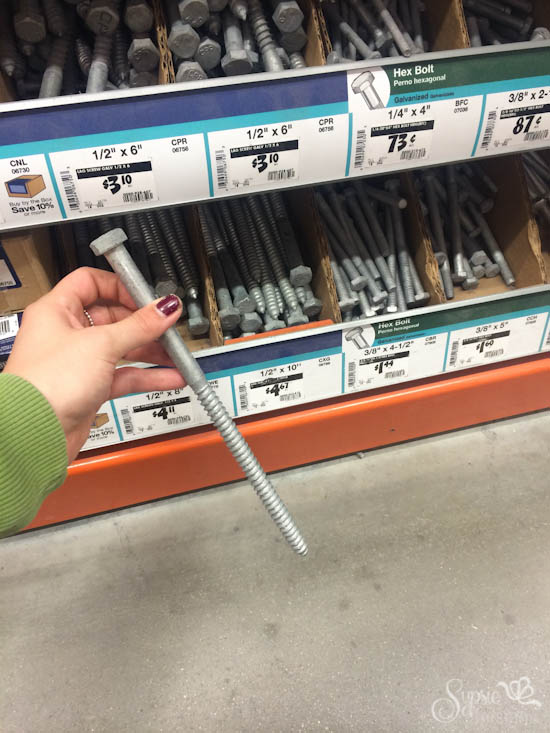 M picked up 6 of these 10″ 1/2″ lag bolts from the store for about $5 each. Using a 3/8″ drill bit, he drilled 6 holes into the beam, two on each end and two into the middle, as well as 6 holes into the wall. Since we reinforced the wall completely across with a 2×6 when building the structure, we had a solid surface to attach the beam too. If we didn’t we would have had to drill into the studs (VERY important so that the heavy beam is stable). After all the holes were pre-drilled, it’s as easy as cranking the bolts into place! I absolutely love the extra rustic touch it adds! Bonus: It’s a great arm workout. 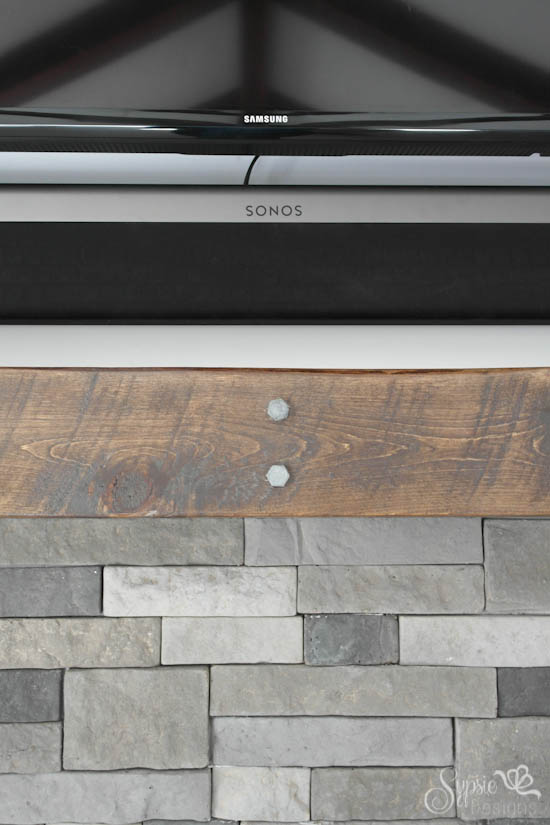 If you want to try this or something similar: screw all 6 bolts into the piece of wood first until they are almost through the beam, then have someone help you lift the mantle into place while you crank the bolts into the wall. How he did this as a 1 man job I will never know, but two people would be highly advised : ) 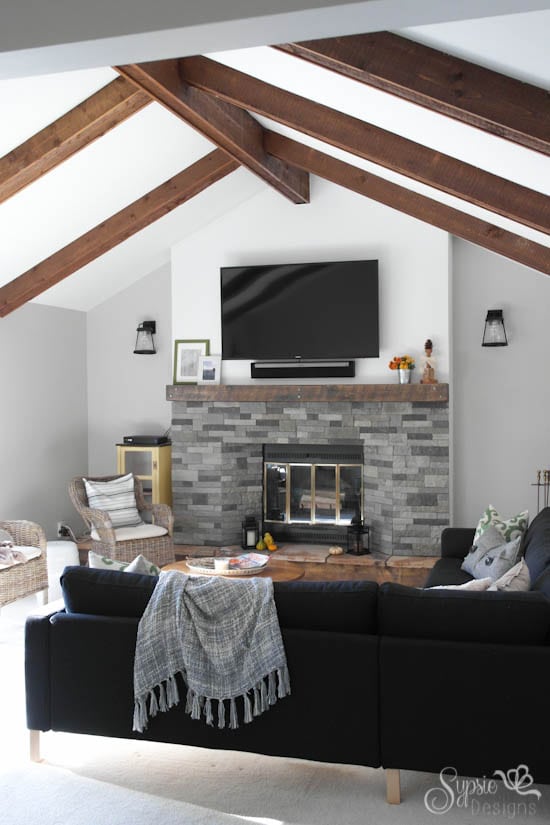 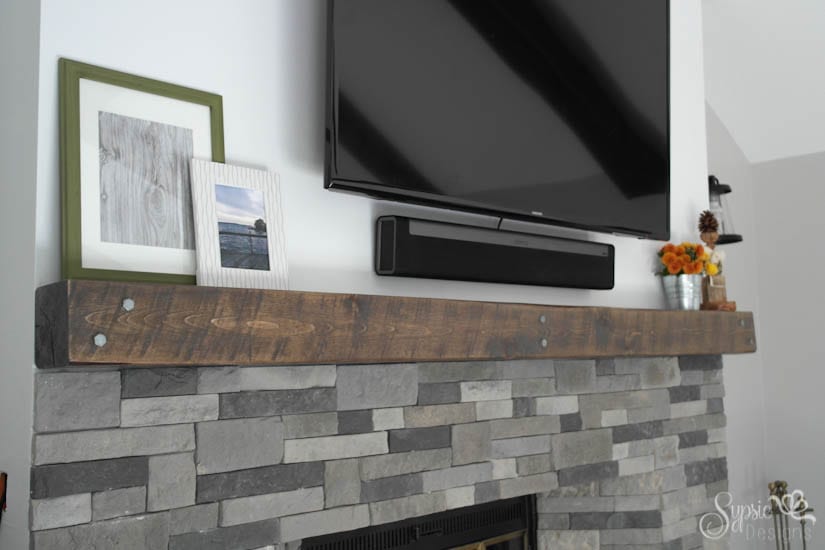 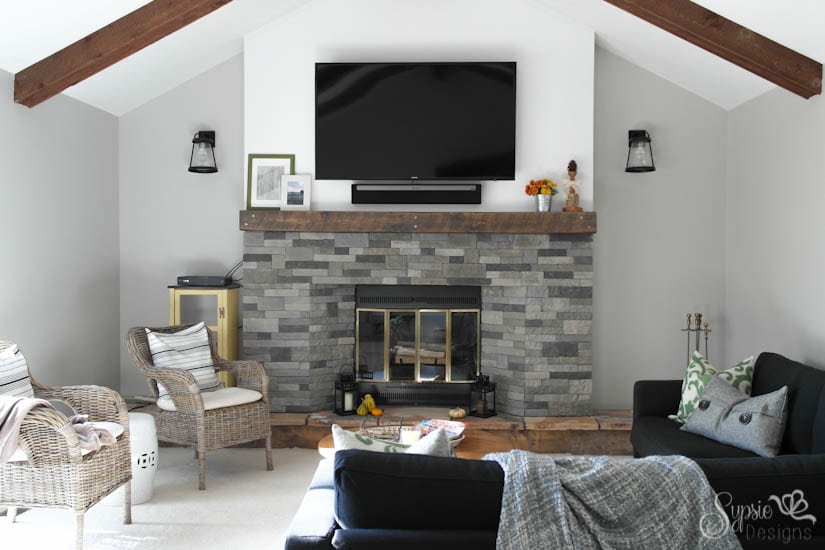 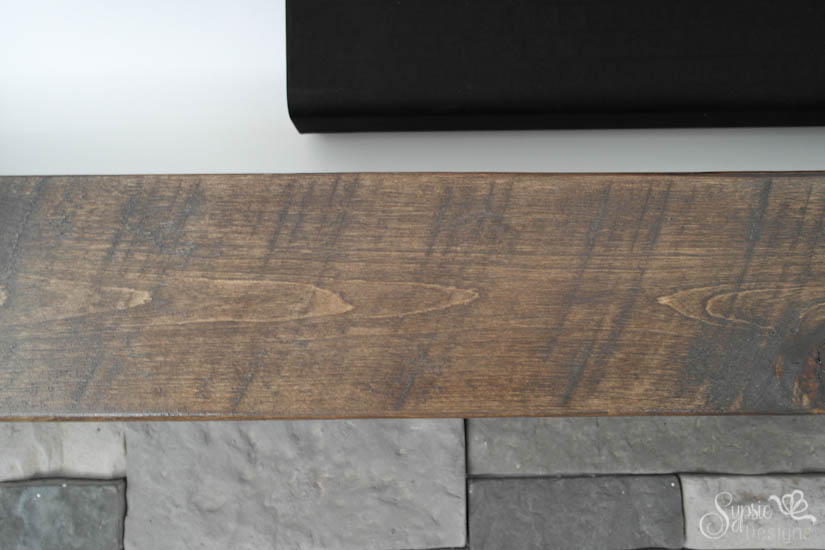 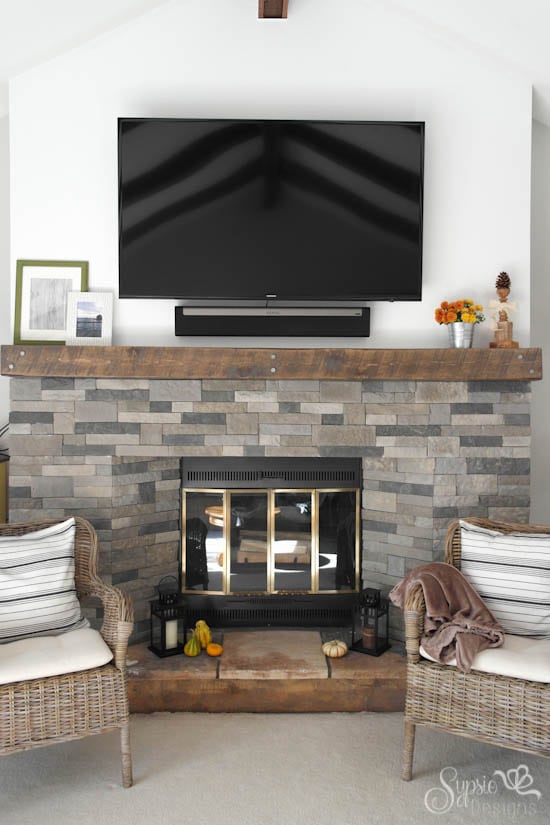 Doesn’t it just have the coolest texture? Like I said, I’m in love!

And that wraps up the adventures in stone and our $50 “reclaimed” wood mantle! What do you think? Next up is the hearth and that insert- we’re about 1/2 done with it all and will share once completed!

PS. Want more Sypsie? Follow us by email (top of the right sidebar!) or any of our social pages!

Linking up to: Remodelaholic

This site uses Akismet to reduce spam. Learn how your comment data is processed.